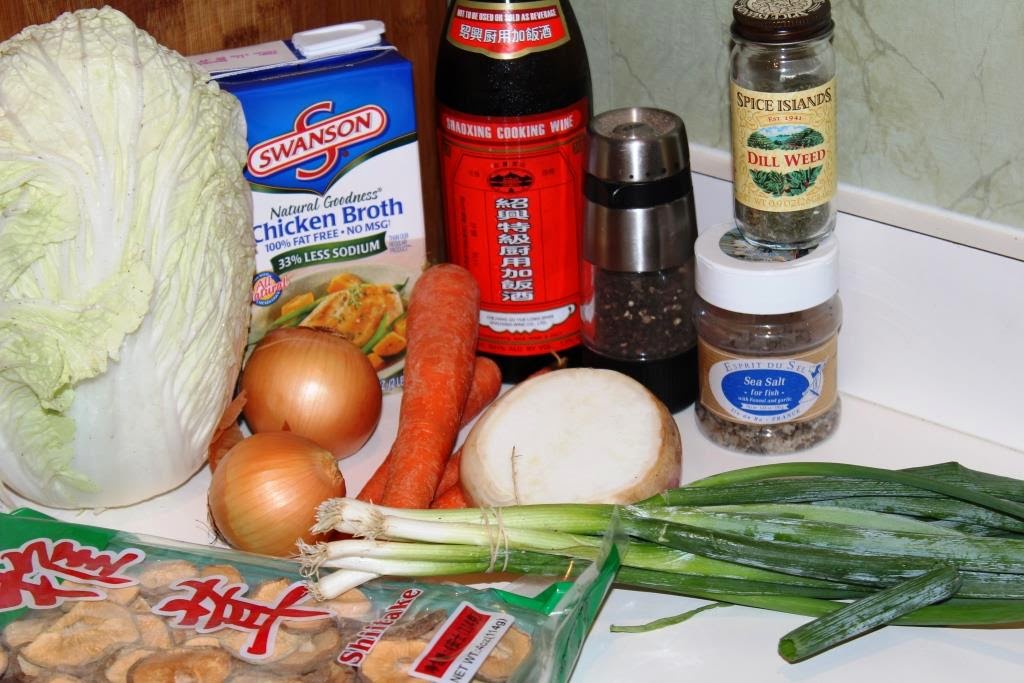 Well that’s my Chopped list of ingredients. It’s my version of Shchi…albeit Russian Cabbage Soup. Oh and that’s pronounced, via Google Translate as a short “shay”, and through Wikipedia, “sheef”. The Cyrillic is Щи.

Dried mushrooms are reconstituted. Everything chopped, sliced, grated, and prepped.  Potatoes, turnips, cabbage, and herbs and spices are put into a large pot with chicken and vegetable broths, and mushroom water.  Pot is brought to boil then set on simmer to soften potatoes, turnips, and cabbage.

Chopped onions and grated carrots are fried in butter.  Sliced mushrooms and onion and carrot mixture are thrown into main pot. 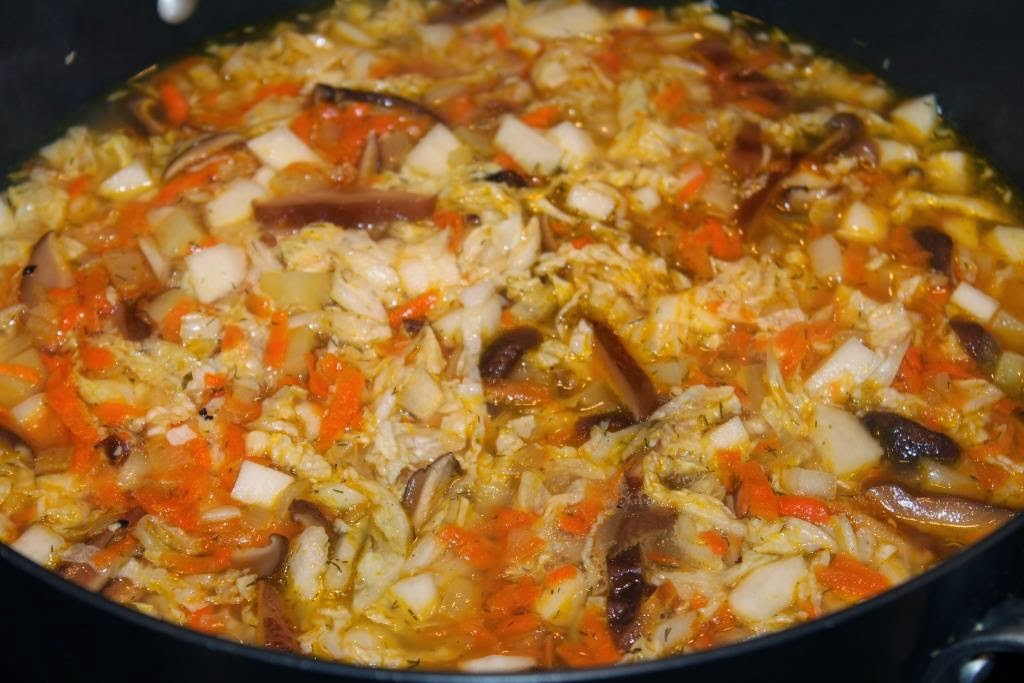 The chopped green onions are added. 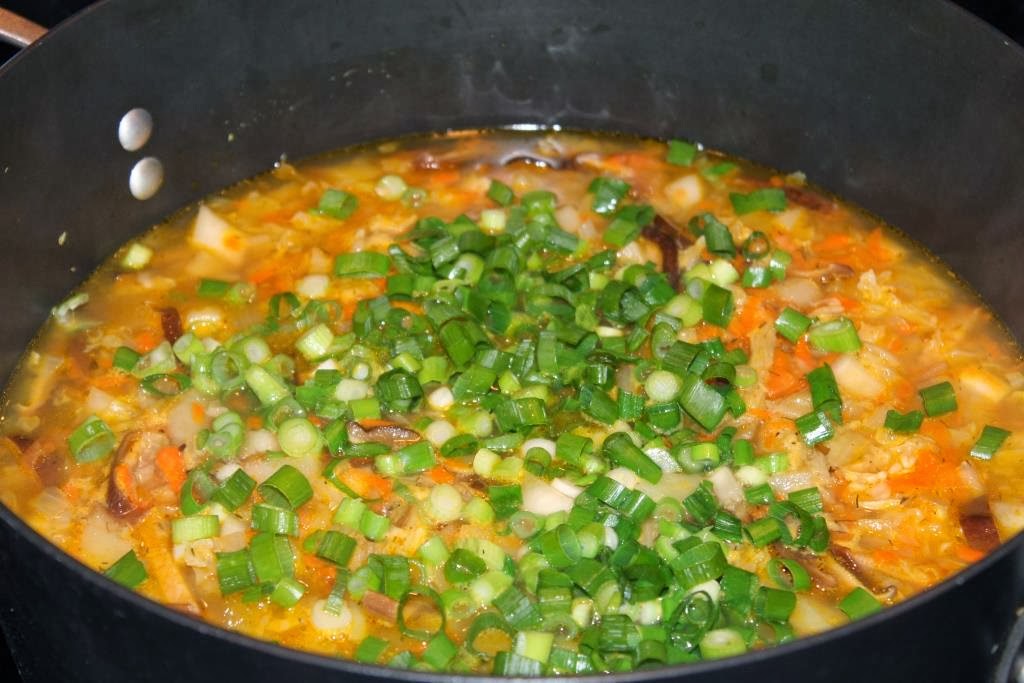 Supper is ready. Served with bread, crackers, or whatever your fancy. 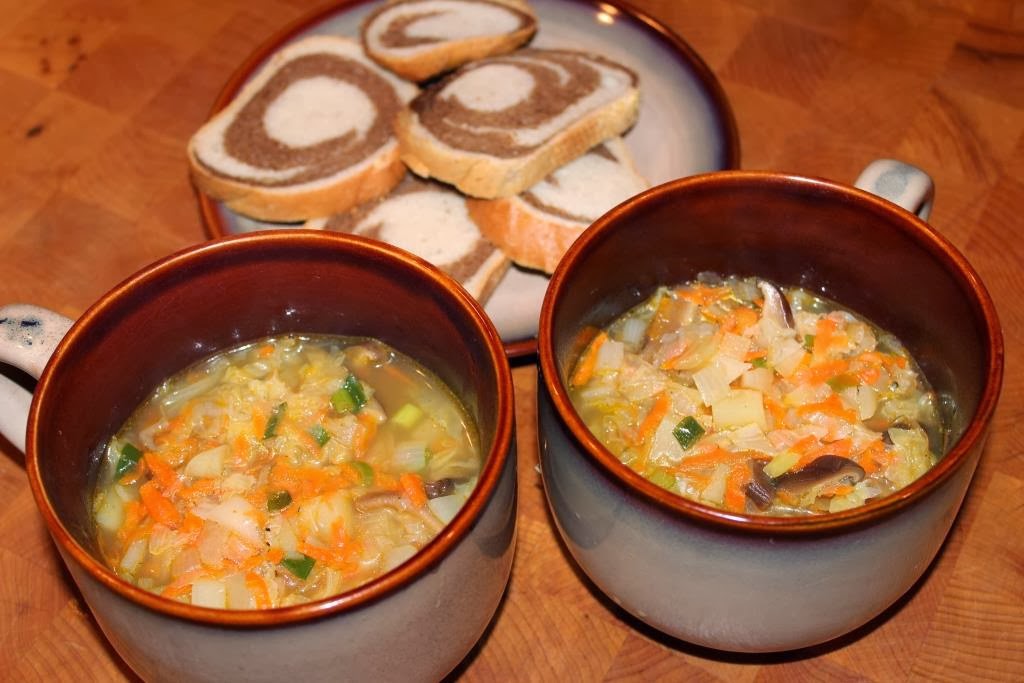 And a dollop of sour cream. 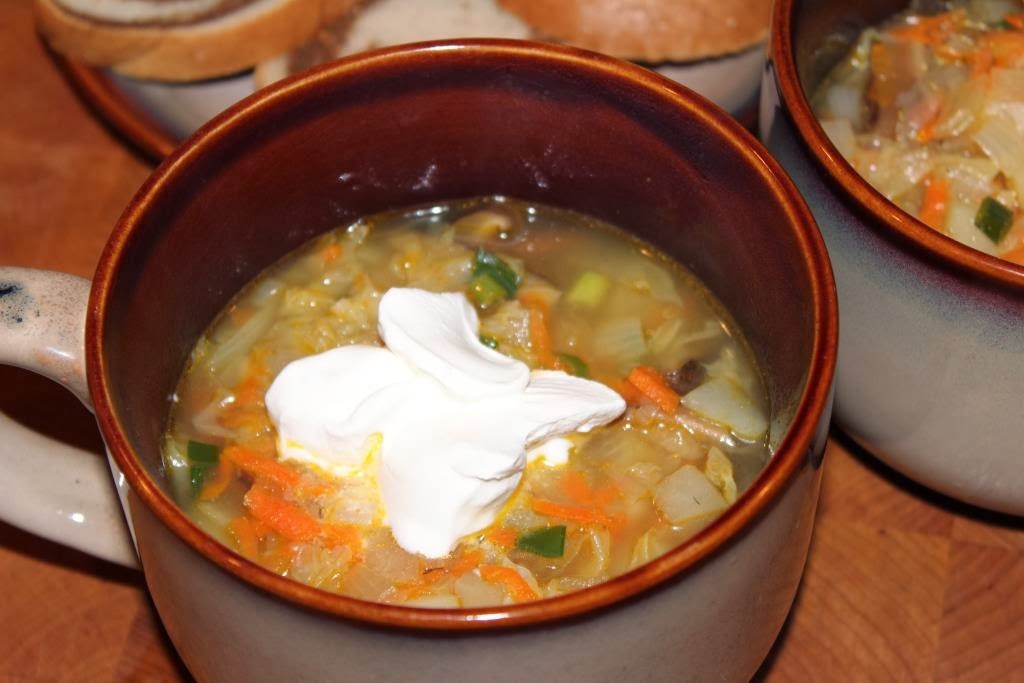 One could say that I have been on a kick lately to try as many types of soups, chowders, stews, and such. Next to try Stone Soup.

Be healthy and enjoy, 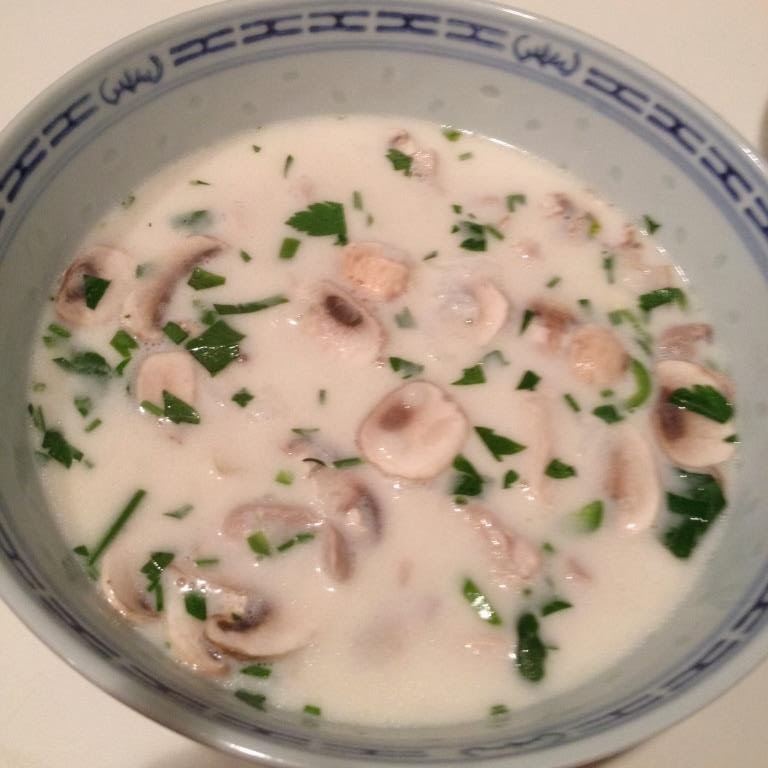 I had thawed out a couple of chicken thighs. Next I cut them in thin strips and placed them in a glass dish to which I added some fish sauce and lime juice. I set that aside for a short bit.

I next prepared the other ingredients; mushrooms, parsley, chili peppers, left-over rice, chicken broth and coconut milk…not cream, milk. (There’s one hell of a difference.) As I didn’t have any lemon grass in the house I substituted some lemon juice.

I brought the chicken broth to a boil, and while that was working I thought that I should make myself a side salad.

I have been making my own salad dressings for quite some time now. In this case I wanted something that would not compete, flavor wise with the Chicken Coconut Soup. I started with some olive oil, white balsamic vinegar, onion powder, dried basil, salt and pepper. I whisked the ingredients and created a simple emulsion. Next I found some romaine lettuce, tomatoes, onion, and celery. Everything was prepped and then tossed with the dressing. 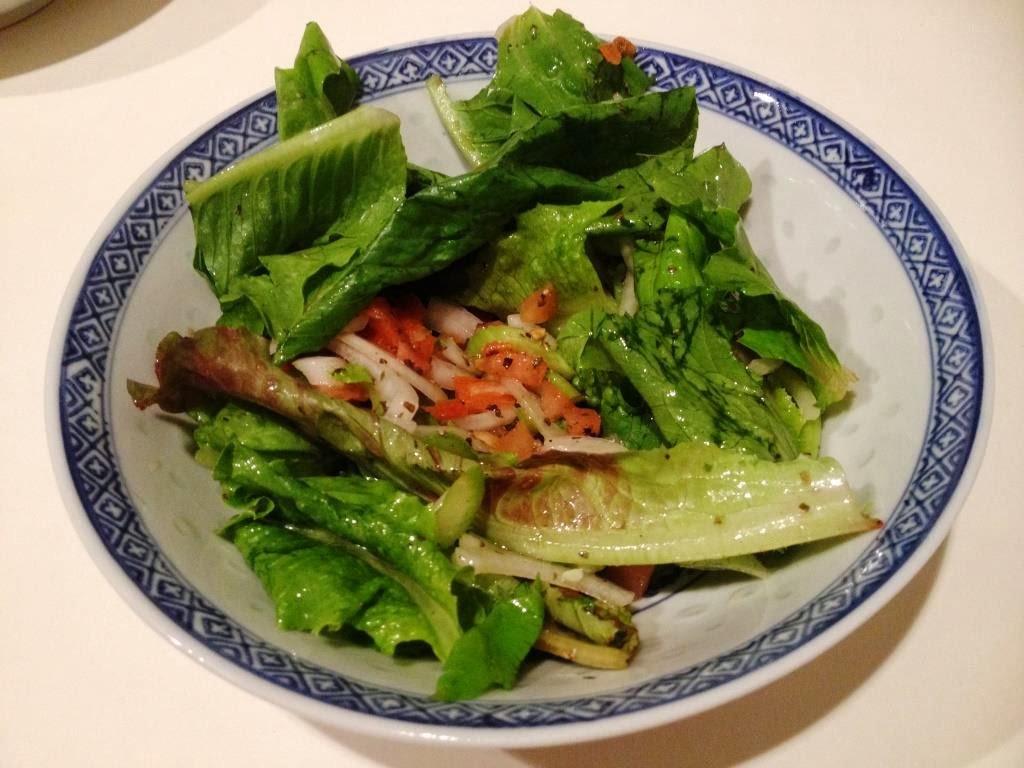 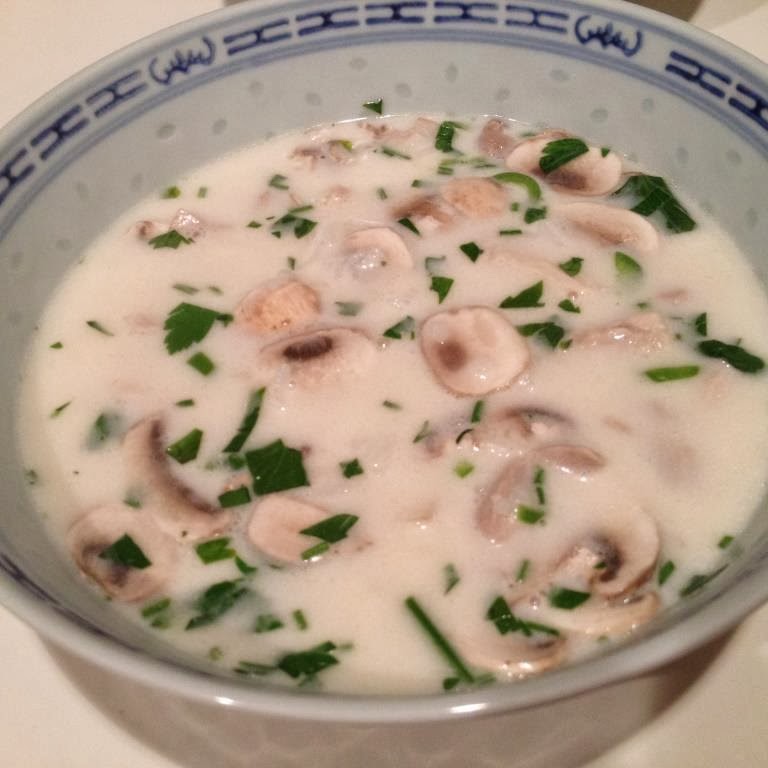 Be healthy and enjoy,

Jim
Posted by Jim Smith at 1:17 PM No comments:

Wanted something light, but filling. Hell I have been burning about 650 plus calories each day on my Schwinn 150. And this young man, sort of, was hungry.

I had taken out about ½ pound of ground pork from the freezer and had thawed it out overnight in the refrigerator. Scanning through the Internet with the terms “Asian ground pork recipes” I found about 1,090,000 results and hits. I found a number that had noodles and the ground pork, sort-of a Chow Mein.

After reading a number Yakisoba recipes that I highlighted I checked through my kitchen and found some comparable ingredients to make a sauce.  These included: Sesame oil, Soya sauce, Oyster sauce, Asian cooking wine, salt and pepper. 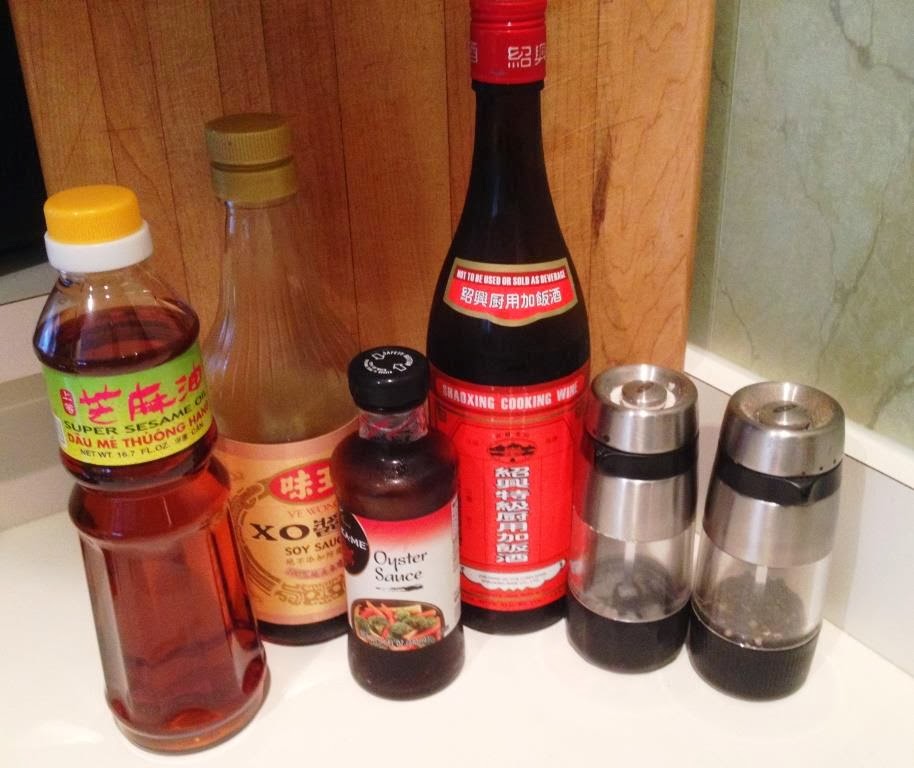 I set the sauce aside.

Next I broke up the thawed ground pork and sprinkled with some salt and pepper.  This I also set aside. 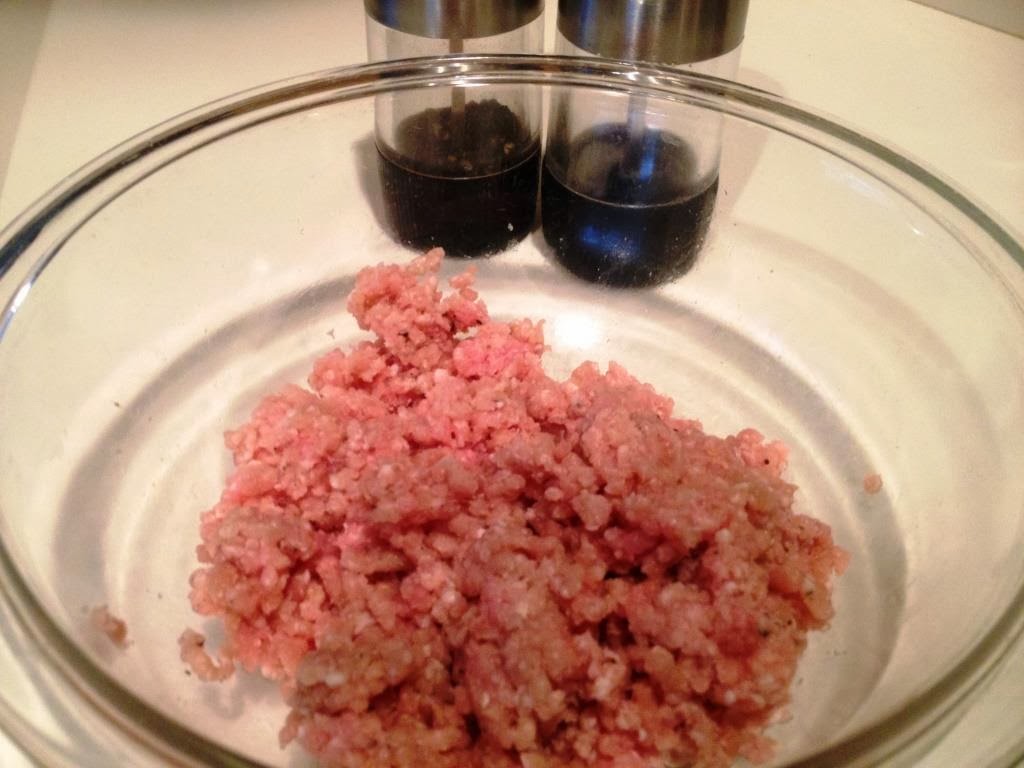 In the refridgerator and the pantry I found some Cabbage, Carrots, Shitaki mushrooms, Red onion, Ginger, and Garlic.  I am sure that I could have added or substituted other items.  It all depends what I found. 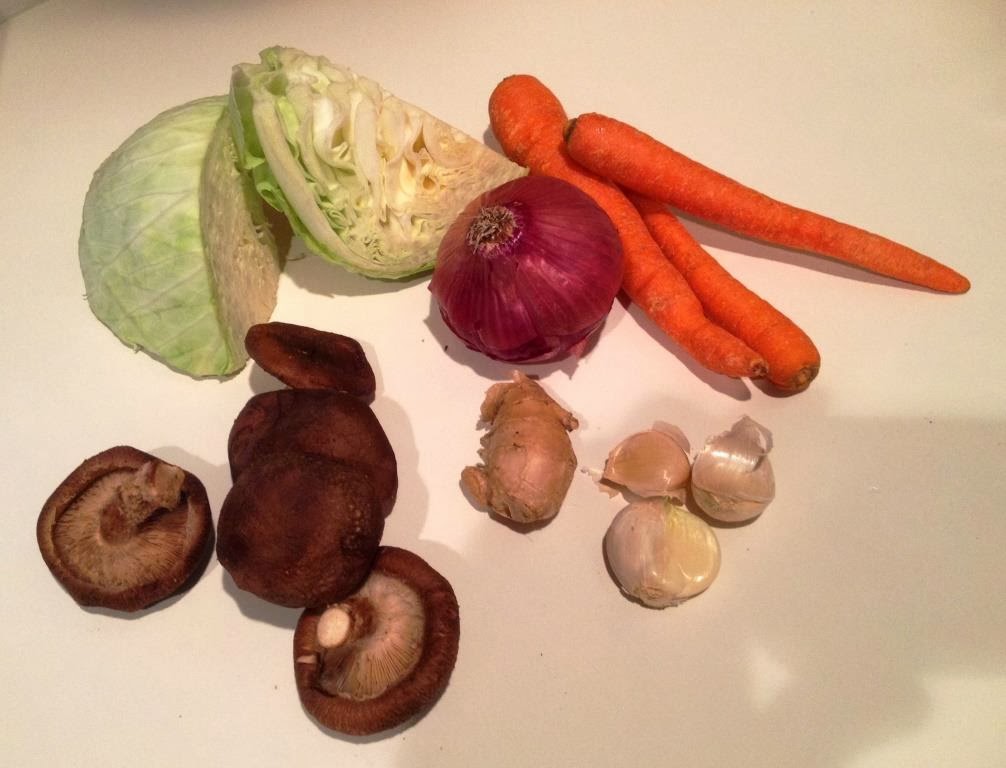 I prepared, chopped, sliced, hacked, grated the vegetables. I set them aside. 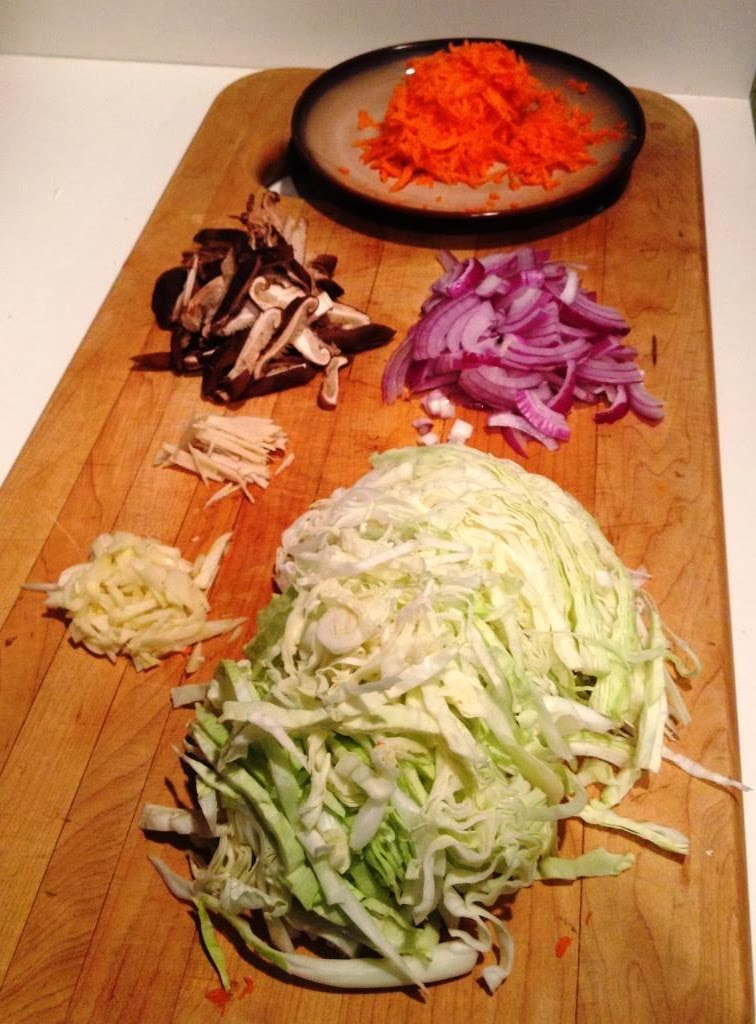 Two squares of Ramen noodles and a small package of Bonito flakes were grabbed, 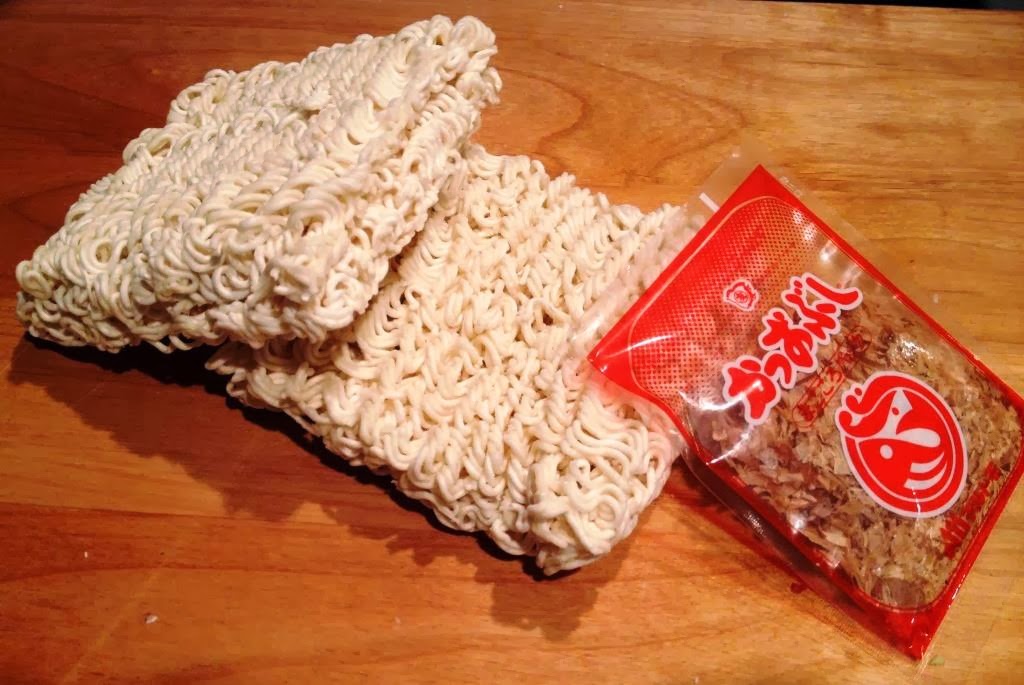 Now remember all those things that I set aside, I heated some Peanut oil in my old Wok, (thank you B&FR), I broke up the Ramen noodles and threw them in to soften and fry.  I removed the sort of done noodles and then added the ground pork.  Once the pork was no longer pink I removed it.  I added a bit more Peanut oil and then started throwing the prepared vegetables into the pot.  In regards to my wok cooking I learned that one of the secrets is to cook everything quickly, on high, but in order of hardness.  Spelling that out, cook the hardest vegetables first and then progress down to the softest.  The degree of hardness sort of depends how they have been prepared.

I added the cooked pork and the noodles and continued to stir fry.  I added the sauce, but it looked as if I had not made enough sauce. I added some Chicken broth just to moisten the concoction a tad... I guess if I had added too much I would have had a stew or noodle soup for supper.

And here is the final product. 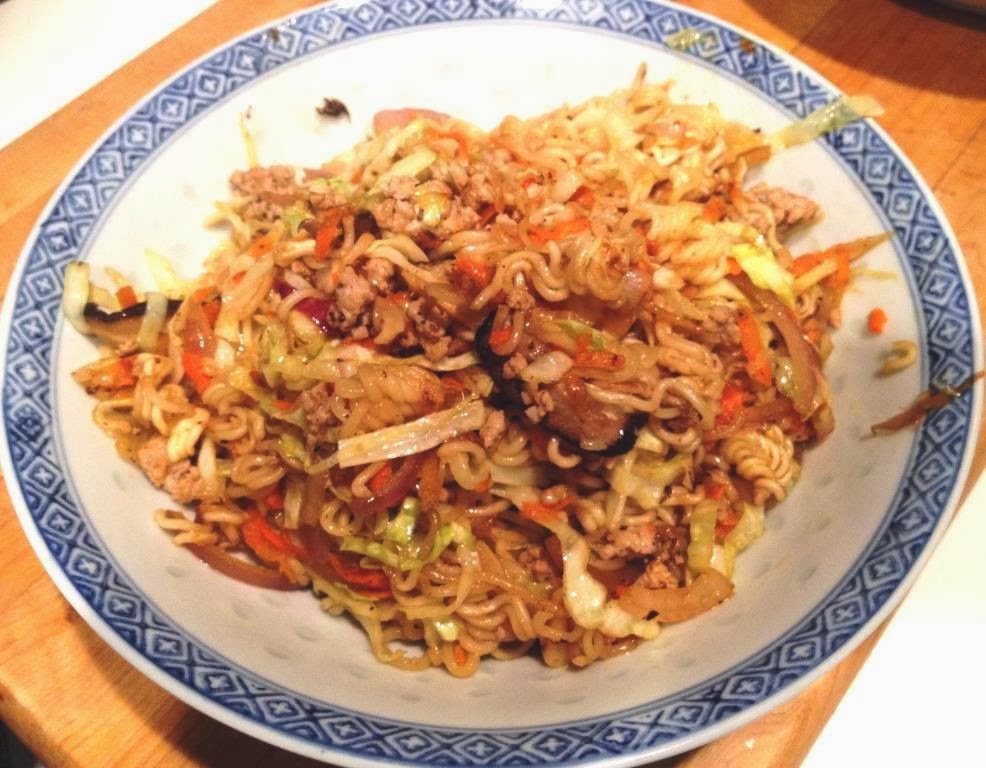 Oh I know that I am not taking any pictures for a magazine...but I was hungry.  I snapped a picture with my iPhone and sat down to eat.  I had two bowls full.  Do I have to write that it was good?  Of course, why do you think I ate two bowls full.  This was my version of Yakisoba, a Japanese sort-of Chow Mein.