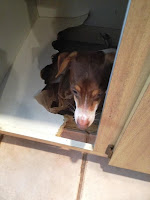 My saga with the dozens of Scotch Bonnet peppers continues.

Well the kitchen is still in a state of disrepair but the contractors have left me a little bit of counter space. Max, of course, has found a recessed area within one of the opened cabinets to just watch and wait for any scrap that tumbles to the floor.

This time my food experiment is a Beer Chili Pepper Sauce. 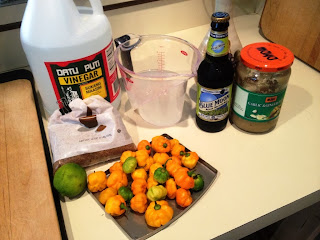 
I mixed everything into a boiling pot of the vinegar and beer. Simmered for about 20 minutes. This potion could pass for any witches’ brew. And methinks that Hecate and her two other weird sisters may just have the right thing for powering their brooms. 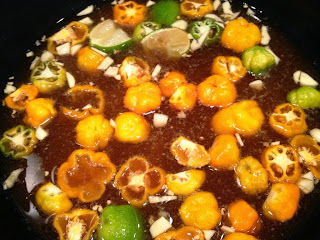 Then I strained much of the liquid and threw the solid ingredients, with a little bit of the liquid, into my food processor.

After bottling the chopped up sauce I noted that there was too much left over liquid vinegar/beer to just throw out. I circumspectly thought that the liquid brew may make a good hot vinegar-type sauce. I took a taste and it certainly had a kick. 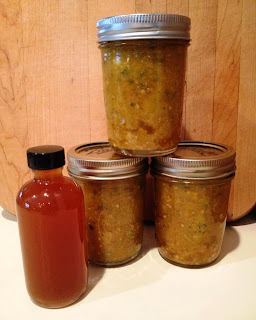 This Scotch Bonnet Pepper Sauce and Vinegar is a wee bit spicier, and much Damn hotter, than its predecessors.

Believe it or not I still have about another dozen and a-half sitting on the counter. And I just picked another half dozen more.  I just have to keep reminding myself not to touch my eyes or any other sensitive part of my body after I have cut, chopped, and hacked these potent peppers.

Jim
Posted by Jim Smith at 1:54 PM No comments: 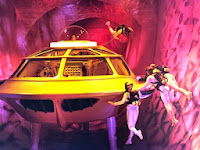 And on a day that I am not allowed to eat anything but clear liquid and the ever filling Jello, I decided to spend some time in my kitchen in preparation of my fantastic voyage. I am sure that my experimentation with my extra Scotch Bonnets will keep my mind more preoccupied than my appetite. 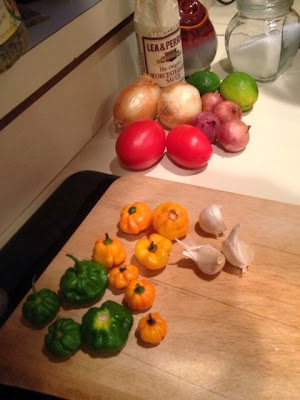 Bringing out my food processor, I figured that this would be the quickest way to fine chop the ingredients. First in went the Scotch Bonnets. Notice that I used both ripe and unripe ones. 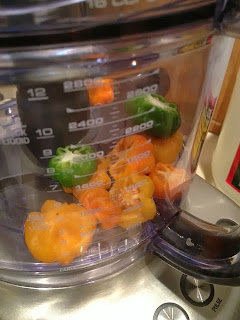 Next I threw in the garlic, Roma tomatoes, onions, shallots, and limes.  Yes, I did not seed the Scotch Bonnets.  I wanted heat.  Neither did I seed the tomatoes nor did I peel the limes.  Does this mean I am crass? Hey, possibly.  I added the Worcestershire sauce, the salt, the sugar, and the vinegar. 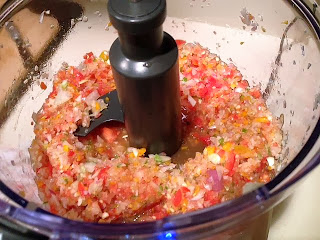 I heated some vegetable oil in a pan and and set the burner to about medium.  Next I added the chopped mixture and heated everything to boiling.  The aroma of the cooking relish was certainly piquant. 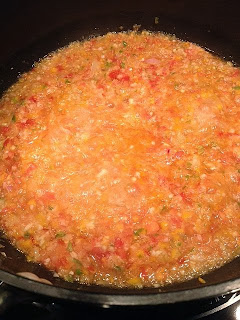 Bottling my Scotch Bonnet Relish I filled three half-pint-size Mason jars.  I've put the cooled down and filled jars into the refrigerator.  I'll try my Relish in about two weeks. 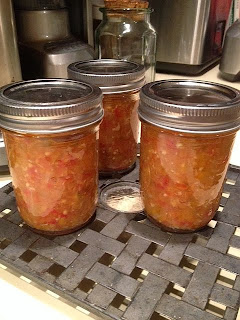 But I cheated, sort of. I tried a tip of a small spoonful of this Scotch Bonnet Relish liquid, and damn... that is hot!

I know that I will enjoy,

Jim
Posted by Jim Smith at 6:41 PM No comments:

I still have a bunch more of them thar Scotch Bonnets. And I mean a bunch. This time I started off with the idea that I wanted to make some Scotch Bonnet Pepper Sauce. Well that what I thought I was going to make... 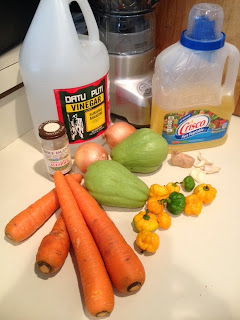 The ingredients were some what easy, I mean easy, to obtain here in Tampa. Scotch Bonnets, (and there still is a bowl full remaining), Cho-cho or Chayote, carrots, onions, ginger, garlic, Allspice, oil and vinegar.

The green things are the Cho-cho, albeit Chayote. I have not eaten, actually I have had a mental aversion to, Cho-cho for about half-a-century. I just have recollections of not enjoying eating them as a young boy. Something to do with being stringy because they were old. But what the hell, the recipes that I was surveying included Cho-cho and I figured that the heat and spice from the Scotch Bonnets would certainly mask any perceived Cho-cho negatives.  (And it does...) 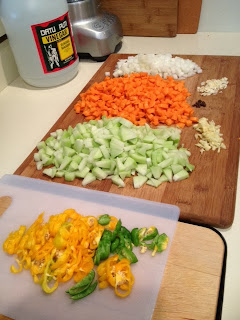 And I chopped up and prepared all my ingredients. In the above image, from the bottom up: Scotch Bonnets, Cho-cho, carrots, and onions.  To the right, top down: garlic, Allspice, and ginger. Upper left: Vinegar and my blender. 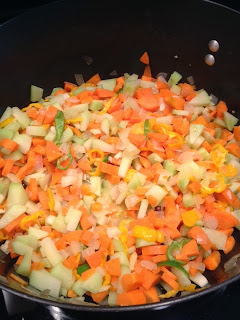 Next the heated oil in the pan and toss in the onions. Then everything else is thrown in. I think the total cooking time was about 20 minutes. Then the cooked ingredients were all placed into my blender with some vinegar. With everything I had, I put in about 1/4 cup of vinegar.

Most of the other recipes I read instructed that I should then strain out the pulp and drain the sauce. Well after seeing the smooth thickness of what I had blended I thought "Why? What would be wrong if I kept the pulp and all?" 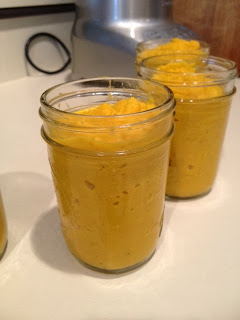 And yes it does look like mustard, but I can assure you there are no mustard seeds or yellow dye added to this experiment. The Scotch Bonnet Spread appeared to be more than passable. And from the processed ingredients I was able to bottle five pints. 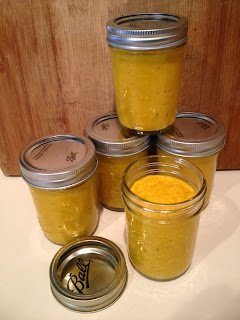 I have now used my Scotch Bonnet Spread on a number of types of sandwiches and roll-ups. I have used it instead of butter, and I tell you that there is a little bite to the Spread. It is definitely something I could eat over and over again.

And I still have about two dozen more Scotch Bonnets, and I've got some more ideas.

Jim
Posted by Jim Smith at 2:41 PM No comments:

This day I didn't want to spend too much time in the kitchen nor did I want to spend an excessive amount of time at the stove. I just wanted to make something quick, good, and easy.  I figured that I would from the gathering of the ingredients to the sit-down-to-eat take about one hour.

Max always sits patiently for me to drop some morsel.  Please some more...

Today's ingredients... Ground beef in the freezer, sweet potatoes and onion on the butcher block, broccoli and baby spinach in the crisper, and Jasmine rice in the pantry. Also to add - garlic, salt and pepper, cornstarch and water.  Ground beef was thawed earlier. I peeled and cubed the sweet potatoes and chopped the onion and garlic.

No, this is not a baby bottle sterilizer, even though I think those contraptions went by the wayside many, many moons ago. 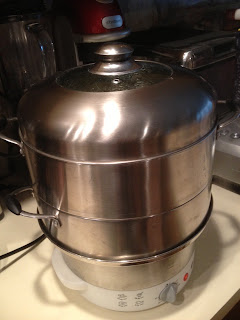 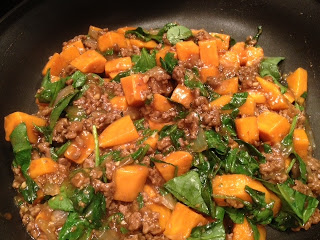 While the rice and the broccoli were steaming I cooked the ground beef, the onion, the sweet potatoes with the garlic, salt and pepper.  I added the mixture of cornstarch and water and then the baby spinach. The only thing I had to do after preparing my ingredients was to make sure that I timed the starts and cooking of each. 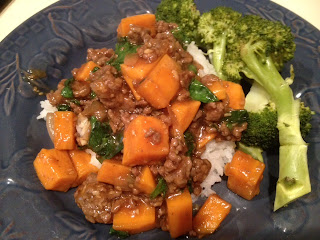 Everything done and cooked, we ate in one hour.

Jim
Posted by Jim Smith at 3:26 PM No comments:

Okay this old Hubbard goes to the cupboard to check out the shelves. 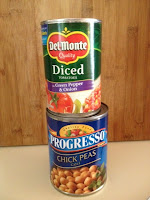 Two cans: Diced Tomatoes and Chickpeas, and a half bag of Strozzapreti pasta. In the refrigerator, Italian Chicken Sausages and half a bag of Baby Spinach. I want something good and something filling for supper.

The top of the list is a link to Yummly... Spicy Pasta, Bean, and Sausage Soup. Why not? 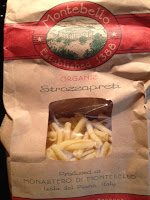 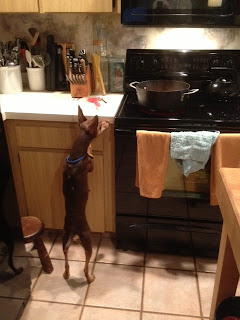 And the Devil Dog, Radar, checked out for his helping on the stove.

And this one was quite easy.  First the sausage chopped up and browned in some olive oil and then I added some chopped onions and garlic.  Next I poured in the can of diced tomatoes and I drained and added the chick peas.  I wasn't sure if there may be too much liquid but as this was to be a sort of a soup I figured that I could add some chicken broth after the fact, especially to cook up the pasta.

I adjusted the seasonings with some salt and pepper.  After a couple of minutes, I think about eight, I checked the pasta to make sure that it was just al dente.  Next I threw in the baby spinach. 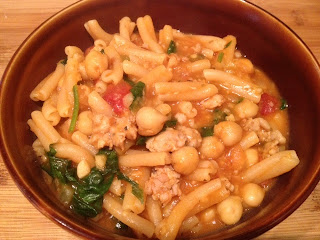 But of course to serve I had to toss on some Parmesan cheese. 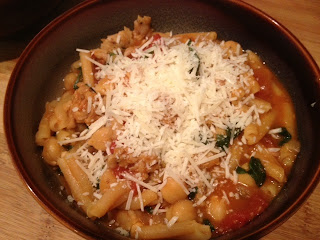 This was good, light, filling, and definitely a quick fix. 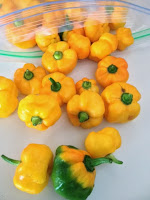 Well I said in my first Scotch Bonnet Peppers' post I have started to work on some recipes and experiments that I thought may interest my palate.  I have a lot of Scotch Bonnets, thanks B&J, and I figured that there was no way that I would be able to eat one every single day for the next two months with every meal.

Just an fyi for any who have never eaten a Scotch Bonnet Pepper, it is somewhere about 100 times, give or take, hotter than a Jalapeño pepper.  And this is about as hot as I will go.

The first recipe I found definitely intrigued me.  It isn't sauce but it is a fast and easy recipe to make pickles using the Scotch Bonnets and a number of other ingredients.  The recipe that I discovered is called Extreme Caribbean Pickles from CaribbeanPot.com.

And I had a lot of the ingredients as indicated by Chris De La Rosa's posted recipe.  Of course I did twist the amounts and added some other stuffs. 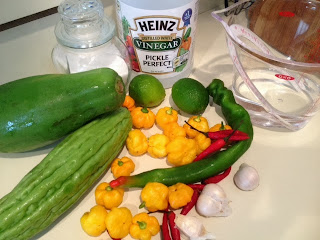 Obviously I included Scotch Bonnet Peppers and then a number of Red Thai Chilies and one green hot long pepper.  This is going to be one hot concoction. 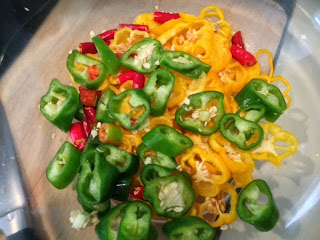 Green papaya, bitter melon, garlic, carrots, limes, Clementines, salt, Kosher salt and pickling vinegar are the other ingredients.  (I didn't take a picture of the Clementines or the carrots.) And then everything is prepped and sliced and chopped.  Now to stuff the pepper pickle salad into the Mason jars. 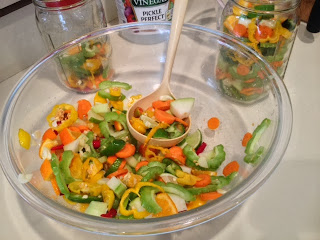 Looks like the amount I chopped and sliced up can fit into two quart and one pint Mason jars. Once packed into the three jars I topped each with some pickling vinegar. 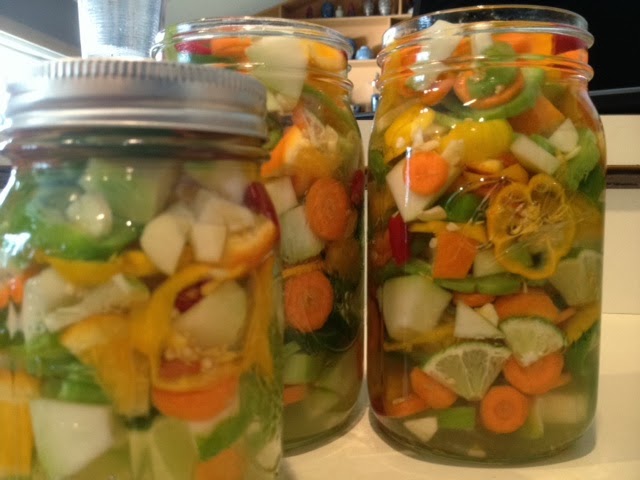 I placed all three jars in the refrigerator, the one with the malfunctioning ice-maker, and I am gonna let them set for about 10 days to two weeks. I can tell you now that I grabbed one of the slices of carrot, just to taste, and I can assure you that this mixture of pickles is gonna be HOT... very interesting, but very hot.

I'm going to enjoy, and I still have about three dozen Scotch Bonnet peppers left over.