No-Knead Bread, à la Hemp; Loaf #7 before and after

…before the real after. 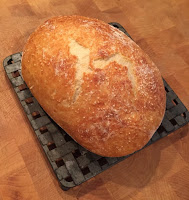 Yes I love bread. Yes I love the making of bread. Yes, I love to eat bread. And I love the smell of bread wafting through the house when it is baking.

I decided that it was about time to start baking bread again…after checking out and comparing the prices of bakery breads offered at the local grocery stores. And of course my fallback is the easiest of bread recipes I’ve ever tried, the No-Knead Bread.

This recipe changes the need to spend a couple of hours in the kitchen to just about less than an hour…but I have to warn you that this recipes does take at least 24 hours.

Ingredients – 3 cups Flour; 1 ½ teaspoons salt; ½ teaspoon yeast; and 1 ½ cups of lukewarm water. That’s all you need, no pun intended, to make one loaf of a great loaf of rustic, crisp on the outside and soft on the inside, bread.

I discovered this recipe some time ago in Suzanne Dunaway’s 1999 cookbook No Need to Knead. Initially I didn’t believe it, but I tried it. And here I am again.

Here’s the history of no-knead bread from Wikipedia –

“Although no-knead bread was first described in the 1999 cookbook No Need to Knead, written by California baker Suzanne Dunaway and published by Hyperion Books, author Jeff Hertzberg notes such a method before the late 1990s in Italy. One reviewer described Dunaway's cookbook as, "a book that doesn’t care about kneading and still produces fantastic results!" Due to the popularity of her no-knead method, Dunaway's book was re-published in 2012 by Grub Street Cookery.

In 2007, Hertzberg and fellow author Zoe François published Artisan Bread in Five Minutes a Day, which uses a no-knead method of stored and refrigerated dough that is ready for use at any time during a 5-to-14 day period. New York Times journalist Nick Fox wrote, "... soon the bread will be making itself… The crusty, full-flavored loaf that results may be the world’s easiest yeast bread." New York Times food columnist Mark Bittman described Lahey's method in his November 8, 2006 column The Minimalist. Bittman praised the bread for its "great crumb, lightness, incredible flavor [and] enviable, crackling crust." Two years later, he noted the recipe's "immediate and wild popularity," and a 2009 cookbook described Bittman's column as, "one of those recipes that literally change the culinary scene with discussions on hundreds of blogs in dozens of languages around the world. " ”


Well I began the day before yesterday and I found an old package of yeast in the pantry. Needless to say that package was old. It was expired. I believe that the yeast was just a few years beyond its printed date and year, 2003. Guess what? Old yeast doesn’t work. I knew that. I know that…

There are many write-ups online regarding no-knead bread, but all are basically the same recipe. I found a very good online write up at Katrina’s site Kitchen Trials.

Well my first retry into making No Knead Bread was a bust. And so after waiting for my concoction to rise after 24 hours, guess where the unrisen blob ended up? That’s right, in the trash.

Armed with a brand new jar of yeast, some bread flour, and some kosher salt I started again. I mixed my ingredients, covered the bowl with Saran wrap and left it to rise overnight. 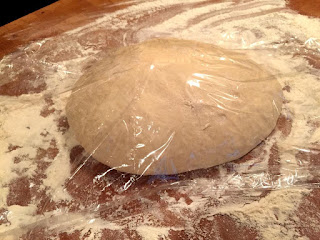 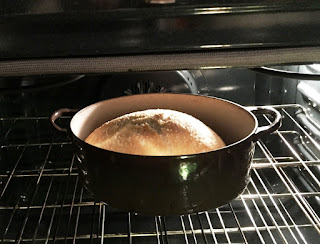 15 more minutes, uncovered and fresh out of the oven. 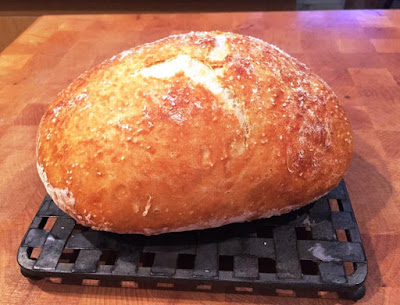 Hell, Jim’s gotta eat. And now I will just start to set a routine into by daily schedule of making bread…with fresh yeast of course. And most assuredly I will be experimenting, once again.

Jim
Posted by Jim Smith at 8:20 AM No comments: